A little vulgar I know, but it's an adequate expression of how I'm feeling right now.
The SD2IEC is working beautifully. Up to this point it was suffering from some syndrome resulting in erratic behaviour at best to a more normal position of outright refusal to work.
I could make things work sometimes by shimmying wires around, so this seemed to be the obvious first move. I stripped all the long wires away and remade the connections. It's often easier to see where a wire should be routed second time around...
While I was at it the ceramic resonator that I used originally was swapped out for a proper crystal. As I've got JiffyDOS in all my C= machines it is necessary to have an accurate clock source. Fastloaders demand cycle-accurate timing and both the internal RC oscillator and resonators are lacking in the accuracy department, to coin a contemporary phrase.
I reworked the cable too as the original one was made from some CAT5 (yellow, yum!) and had been shortened a couple of times to try and increase reliability. The resulting splices were ugly so had to go.
The result of all this industry? Bing bing bing bing Jackpot! Solid, speedy loading. C128, C64 and VC20 all enjoying the flowing bits. 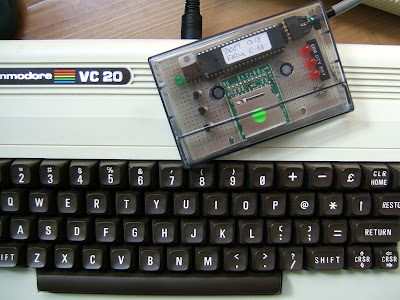 The cassette case is a scaling back of the original scope. I was going to mount it inside a C2N datasette player, hence the fashioning of the board into a rough cassette tape shape. This was because my first SD floppy emulator was a SIO2SD board for 8-bit Ataris, built into the shell of an XC12 (Ugly, ugly brute) cassette player, which I may well present soon as I have to go back inside it to repair a keyswitch.
Here's the board, naked and from behind - exactly how I like it: 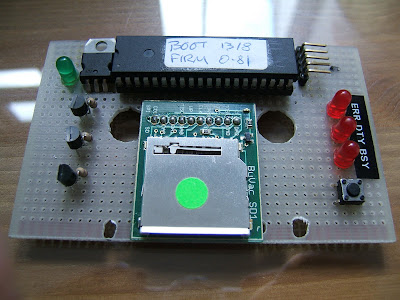 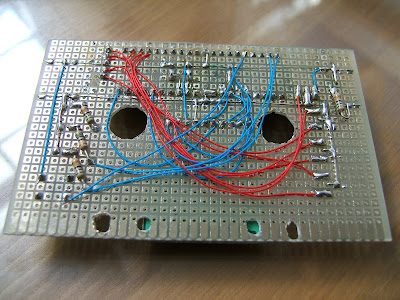 I am constantly in awe at the fine people who produce these fine projects. If I had to doff my hat every time the awe swelled within, I would be doffing almost continually. Lars P, Unseen and countless others, you know who you are, you have my deepest admiration.
The features of this device are too many to mention, who would have thought that an ATMega644p, some discrete components and a few hours soldering oculd have produced a wonderful thing like this?! I'm thinking that the SD/MMC bootloader might have to be employed in the Arduino board when I get a 328 to play with...
Considered,
Posted by SirMorris at 08:02