The einSDein interface is quite versatile. At its connector it is simply a very basic set of Z80 bus and control lines.

So it shouldn't be hard to interface to other Z80-based computers, right? 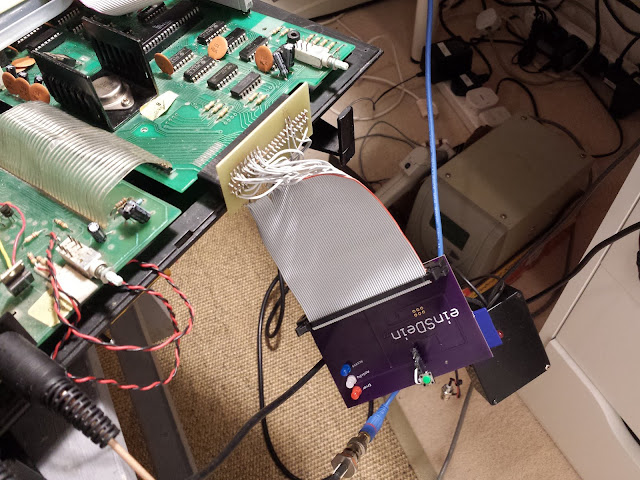 Here is an issue 2 einSDein wired up to a Video Genie, the UK version of the popular TRS-80 clone made by the EACA corporation. It is variously known by other names such as the Dick Smith System 80, PMC-80, TRZ-80 and so on.

The expansion connector breakout was custom made one rainy afternoon, and while it looks a mess it does the business.

A small machine language program was written to perform a directory listing of the SD card. This was converted into a cassette image format, then loaded using PlayCAS.

Here is a video on arguably the best known video distribution channel in the western hemisphere. It shows the aforementioned program pulling a listing from the interface pictured above.

The more eagle-eyed may recognise that the programs on the card are not Genie programs. This is being attended to, dear reader. I have written a converter program which takes cassette image format files and spits out a raw-ish binary dump which can be loaded from SD card. It only works with 'system' or machine language programs at the moment, but a gander at the Level II ROM reference book will soon see to that restriction.

Armed with a copy of MAME and its fine debugger I will spend a few quality hours stepping through the cassette loading functions to see what I need to do in order to craft a work-alike in order to load BASIC from the SD card.