I linked to the excellent MMBeeb project in an earlier post. It's been at the top of my project list again as I'm taking a pile of BBC B computers to TechAdventure which I'll be attending at the end of the month. I'm hoping to talk about MMC, old computers and the conjoining of the two. I'll have a table full of retro equipment to show, and some to sell.

As one of the first MMC projects I undertook, the MMBeeb board was a stepping stone that led much further than I expected. Whilst revisiting it in the light of all the knowledge I've acquired since then I've come to the conclusion that there are some subtle bugs with the original hardware. I'm hoping to contact the originator of the project and see what he thinks. I'll post an update here as soon as I've determined if I'm on the right path. In the mean time enjoy the view: 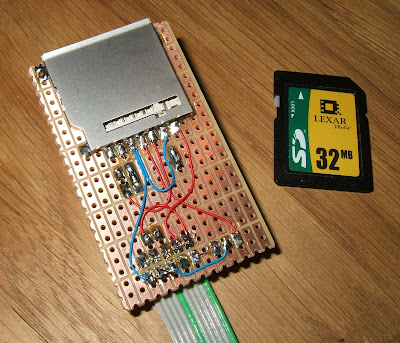 The revised circuit uses the same standard resistor divider as used on every other MMC interface I've ever made and a 3v3 regulator. That's it. It's not the hardware that makes MMBeeb special though - it's the software. It's a stupendously slick DFS conversion that integrates smoothly into a system. It also works with a second processor, which is an indication of the care and attention to detail that Martin has put into his work. And for the few paltry Great British Pounds that it costs for one of these you'd be crazy not to..!
Posted by SirMorris at 08:09

Have you got the list of parts and schematic used for this?

About three-quarters of the way down the page a member has created a schematic:

Hi - do you have any of these to sell? I'd like one but I dont think my solderings up to it :))

I usually have a number of units available - there's an email link on my profile page, see the bottom of this page.