It only takes a Jiffy

As I now have the uncanny ability to burn EPROMS using only the power of my mind and, well, err, some equipment, I needed to try it out with something.

Since my SD2IEC (currently broken) supports the JiffyDos turboloader, I decided to upgrade my C= machines with new kernels (Or is it kernals? The two spellings seem interchangable in the world of Commodore, but I'll stick with the former). This upgrady action might give me the impetus required to fix it.

The '128 was easy enough, the ROM chips used were pin-for-pin compatible with modern 27c types. The VIC needed a small adapter board and some leg-bendy, jump-wiry action. The real fun started when I cracked open the '64c. This later model of '64 has serious cost reduction issues - like a lack of sockets for ROM chips. At least the chips they used were, like in the '128 model that followed, pin compatible with modern EPROMs.

Undaunted I considered desoldering the chip and adding the socket, but that wouldn't have been hacky enough, would it? :D

So I got out my side-cutters and removed the power leg. Covered the wound with a small sticking plaster (band-aid for our international readers) and patched a wire from the PCB stub to the power leg of my EPROM. 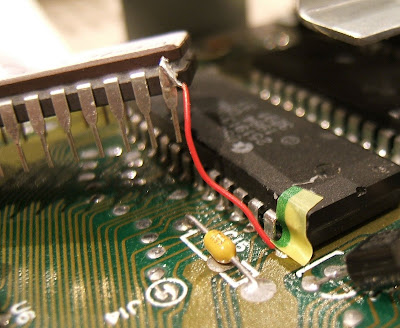 Next I bent the EPROM's pins slightly under itself, giving it a bow-legged aspect that I found rather pleasing. This newly lamed chip was then spring-loaded piggy-back fashion over the top of the incumbent ROM. 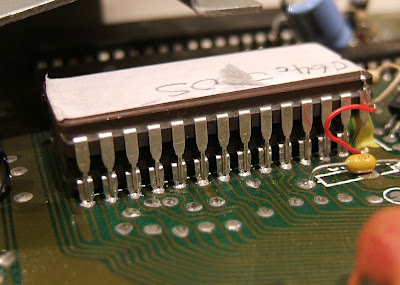 Like so! Isn't that sweet :) It's giving the other one a special cuddle!

I powered the old girl up and ... nothing. Black screen. Panic sets in. Turn it off and on again. Despair. Slump back onto my ample rear and hello! What's this?! I hadn't been waiting long enough for the machine to boot - I forgot that they take a second or two. It worked!
Posted by SirMorris at 01:25

That is never going to maintain contact for long...

You may well be right :D

If it all breakinates then I'll consider more drastic action ;)