For your eyes, ears only. Oh, and everyone else's too.

Intrigued by something I've done? Want some? Just ask. I can't post every bit of code that I write, every schematic. But if you want some help or encouragement then just contact me. I'm always pleased if I can be of some use.

I was working a few extra hours this weekend as my code finger was a bit slow last week. It's not often this happens, unlike in my previous life - scratch that - sentence, in the games industry (I'm not bitter - just astounded at how long it took me to realise how ugly it is). Bizarrely I had a camera with me so I took the liberty and a photo. 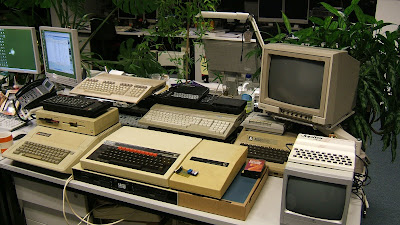 You know that you can click the pic for a higher resolution version, yes?
The museum has grown a little.. The master has been swapped out for a regular B. It has got a second processor attached though, and you can see its tiny appendage - an MMBeeb interface. Marvellous stuff by Martin Mathers. It's sitting on top of, yes it has to be said - a cardboard box - and quite the largest piece of retro peripheral that I own. A dual 5.25 inch floppy drive. Look at the size of that thing! It has an unbelievably long cable attached too - 10 metres at least - which by any stretch of the imagination shouldn't work. That's quantum physics for you! Probably.

OH! How I wish that Jupiter Ace was mine, alas it's not. It belongs to Mr Cliff. B'stard. ;) This one has a few yellow marks but it still works. Especially after the keyboard contacts got a firm rubbing with an eraser.. Win! Only about 8000 of these were sold. We loaded up some software a while ago and it was fairly obvious why this was a niche machine. If you come across an emulator then try 'fish and flutterer'. It's pure class.
Posted by SirMorris at 13:43

I still have my ZX81. I love that you have actual posts about current activities with the ZX81, mostly the internet looks backwards and downwards to at the ZX81.