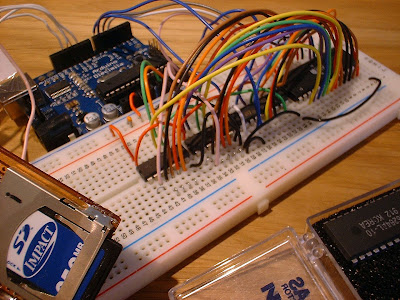 What a mess! But it works - sometimes :) All that stray capacitance - well someone's got to give it a home.

This is what I'm forced to do because the Stag PP39 EPROM programmer that I was so generously given by a fellow FreeCycler works well, but for its serial connection. Ho hum. Wanting to burn an EPROM to hold the driver code for the Atom MMC interface was the necessity that was the mother of this frightful invention. In a fit of pique I had the idea that I should create a 3-step process: Burn my code into an EEPROM, transfer this to the programmer's buffer, and thence into an EPROM! Why not just use the EEPROM for my project? An astute question, esteemed reader. Well the type of EPROM expected by the Atom is an olde-fashioned marque with a subtly different pin-out to the more contemporary (read: standard) 27x series. Luckily the PP39 can burn the 2532 that was required. Even luckier I suppose is the fact that I had one of these! An adapter board can be made to facilitate the harmonious interfacing of the disparate breeds, but this would involve less lashing-up, you see? And we all need a jolly good lashing from time to time.

I digress. What you see before you (or more correctly above) is an ls299 accompanied by a brace of ls164 shift registers. These in turn are connected to an 8k Atmel EEPROM. In the driving seat you see the Arduino and - naturally - a poor but functional MMC interface. The 164s are in charge of address generation, and the 299 has bi-directional data line duties. It's a simple and effective design which I have referenced before.

I've developed the Atom MMC driver in assembler, naturally. This time I opted for cross assembly. If you saw the code attached to my previous post (my - is that the time?) you may well understand why - the inline assembler is hard work with its terse labelling syntax. I develop and assemble on a PC, using a custom Visual Studio workspace and a freeware 6502 assembler. The resulting binary is debugged as far as possible using Wouter Ras' brilliant though tricksy DOS Atom emulator. When I'm happy with the code it gets put on the MMC card and burned to the EEPROM using a subtle combination of swearing, crossed fingers and sacrificial chickens. The burning process needs to be attempted a fair number of times (the stray capacitance, bless) until the verify step passes and I can be sure the lash-up has worked. Once transferred to the programmer, the code fizzles its way onto a freshly UV-cooked EPROM and then into its warm and welcoming bed - Socket IC24. And so to work:

Presenting - the MMC adapter I built to fit on the venerable machine's expansion port, as visible here. 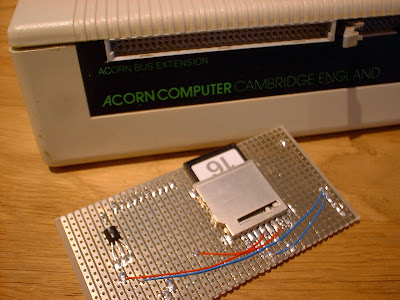 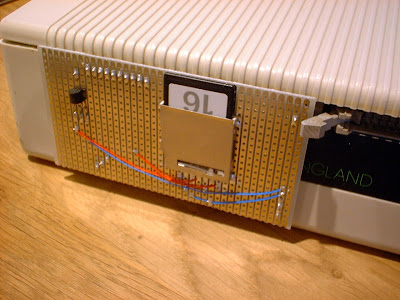 Goodness - that is the time! Two and a half months this post has taken me! Either that or my post-Sachertorte coma was deeper than usual... Whatever, forgive me. I am off to play Atom Invaders - which now loads in under 3 seconds, a far cry from the original 5 minutes of the tape version!
Posted by SirMorris at 11:55

You're very kind but easily impressed..!

I read this post when you fist published it, but I finally saw the finished creature at Byte Back last weekend .. Very, very, impressive! If I still had an Atom, I'd be after one..

Thanks!
I just wish I could have gone to ByteBack - maybe next year?!