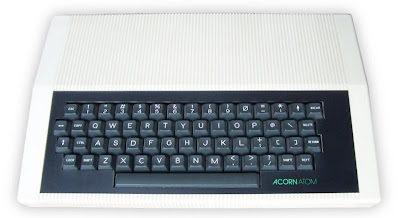 She's arrived! After many years of fussing and prevaricating I've finally taken the plunge and bought myself an Atom. The prices were rocketing in the bay of E, and I reckoned on the time being nigh. This one was advertised as having a broken key and otherwise with little hope of receiving a working box I decided on taking a punt and fixing it up if necessary. I've always loved this machine. I owned one as a boy although it was only a half-populated board without a case. It still did the business though!

I must admit to being a little saddened when I opened the wrapping. It was grubby and half of the keys appeared to be smashed in, sitting a good 6-7mm lower than their neighbours. The 1st thing was to open it up and check the power supply status. The Atom was infamous for overheating and many owners bypassed the internal regulators in favour of feeding it a regulated 5v diet. As was indeed the case with this one. It had received some tweaks in its time, but I was really happy to see the work was all of a high standard. These were all what I call 'magazine hacks' - the electronic equivalent of a one-liner joke. Single wire patches for enabling an eighth bit on the printer port, joining some lines to an external socket for wiring a joystick, nothing major. I was chuffed to see that it was fully expanded memory and support-chip wise. 12K RAM & 12K ROM plus a utility kit that I'm still having trouble finding any info about. I'll have to resort to a disassembler I think. No colour board but then I wouldn't ever have even contemplated that. Too rare.

The mother and key boards were in a real state. I think it had been stored on top of kitchen cupboards at some point in its life and it had received a good layering of yellow grease and fibres. Some keys were sticking and this was the main reason. I've since scrubbed it with a toothbrush and plenty of warm soapy water and now you'd never know! I was shy of putting it in the dishwasher as some people recommend, this may be ok for generic PC keyboards but rare vintage '80s hardware... 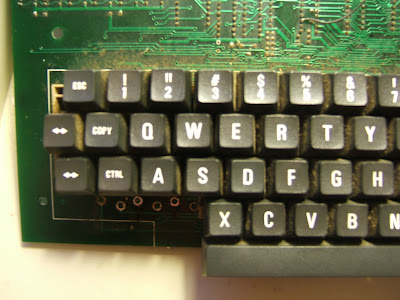 At some point in its history the three keys in the lower left had been replaced. They were replaced with high quality keyswitches, which - well I never - made the keycaps sit higher. What had happened was that the previous owner had raised the original keycaps with superglue to match the height of the replacements. The original mechanism is a cheap spring-based creation which I've only ever seen in Atoms ... and a keypad that I was given recently! That was handy, wasn't it! So I hacked the keypad and replaced the switches with something contemporary and far more suitable. And the same height! The caps all came off and were cleaned and repaired where necessary.

The machine is now clean and tidy, ready for work.

One tough trick was finding a plug to fit the odd power socket dimensions. It's some olde fashioned imperial jack size. Eventually located with the assistance of an Atom owning colleague I was able to juice the old girl. To my immense surprise it eventually reset and presented me with the very comforting words:

A computer's no good without software, right? Like all good '80s machines this one needs some square-wave goodness. I couldn't locate any software to generate the required signals that worked on a modern PC, so being handy with a compiler I got to work. I'm pleased I did all the work on ACE - the techniques transferred instantly and I had a program to translate raw program dumps into WAVS. And text files into raw dumps. And vice versa.

There looks to be a new site emerging that could eventually be a must-see for any Atom fans. I'm speaking in the future tense as it's not there yet but I've spoken with the masters and they're promising big things. Watch this space.

my name is Kees van Oss and I'm living in the Netherlands. I bought an Acorn Atom in 1980 and I'm still a great fan of the Atom. My Atom has been expanded a lot over the years.
You can see it on the site: http://home.casema.nl/hhaydn/index-uk.html
Select Atom Specials and then Special 3 to see my Atom.

I also have my own site but it's in dutch: www.home.zonnet.nl/oss003
My Atom has an I2C interface, 3 ISA-slots for using 8-bits PC-cards and a mouse interface with a hardware screenpointer.

I also have written the Atomic Windows ROM. It's a ROM with basic commands to build dialog boxes in a Windows look.

I even did some research about the internet protocols and managed to get a HTML-server running on the Atom. With an ethernet card in a ISA-slot and the HTML-server running, I can access the server on my internal network with a PC running Internet Explorer.

When I have time, I still write software for the Atom.

my name is Kees van Oss and I'm living in the Netherlands.

I bought an Atom in 1980 and still own it. It has been expanded in many ways, hardware and software.
My Atom as an I2C interface, 3 ISA-slots with ethernet adapter and a mouse with hardware screenpointer.
I also have writtten the Atomic Windows ROM, extra basic commands to build a graphic dialog box with mouse control.
You can check it out on: http://home.casema.nl/hhaydn/index-uk.html
Select Atom Specials and then Special 3.
I have my own site but it's Dutch:
www.home.zonnet.nl/oss003

At the moment, when I can find some time, I am still writing programs for the Atom.

I read in your Blog that you managed to make an MMC-interface, that's very interresting because MMC is a project still on my todo-list. Also making an IDE interface is on my list.

It is nice to see that the Atom is still alive.