Finally the ennui has passed and some time was devoted to seeing what I could rescue from the ashes of the original M5 multi-cart. 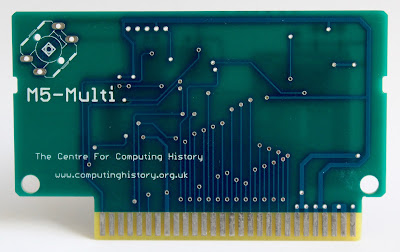 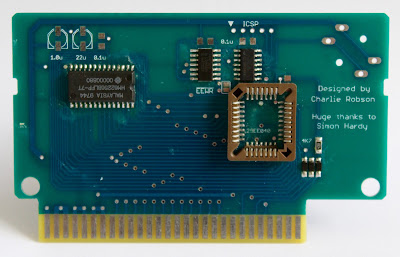 There were a number of factors that contributed to this situation and I dare say that I could probably get it working now that I've had some support and debugging help from a friend and fellow enthusiast - Bas at BetaGamma.

The main issue with the board was that the ROM images needed to be stepped through one-at-a-time by pressing the button on the front. It was a chore and the reset method I devised was at best unreliable.


What I really wanted was a menu-driven design which was simpler. So I came up with this. 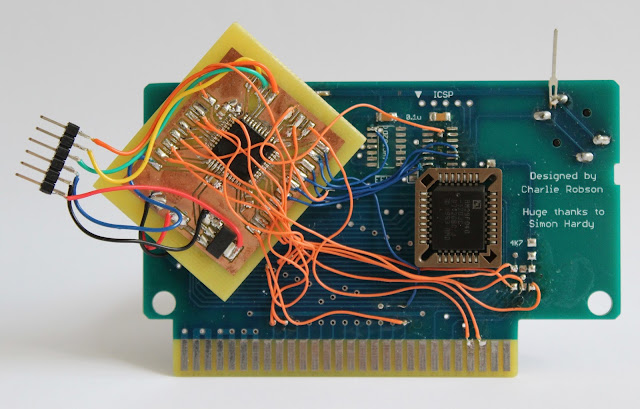 Gone was the PIC microcontroller and its supporting hardware. Added was my CPLD of choice, a Xilinx XC9500XL series chip. 5V tolerant, and in my experience utterly bomb-proof.

The M5's cartridge slot contains a few signals which are very useful - IOWRITE and EXTIOB. The former is what you'd probably guess - asserted when an IO write is in progress by the Z80. The latter is a signal originating in the M5's memory controller custom chip, and is asserted when an IO access is made to a port in the range $70-$7f. Under normal circumstances nothing in the system writes to this IO port.

My plan was to watch for writes to one of the $7x ports and capture the data bus content. This would be used as a base page number for selecting any one of the 64 8K pages of rom in the multicart's EEPROM. Most of the M5's carts are 8k, with the exception of BASICs F & G, and FALC - the M5's spreadsheet.

The M5 has 3 ROM select lines on the cartridge slot. ROM1, ROM2 and EXT-ROM.

The CPLD outputs 6 address lines used as bank selection on the EEPROM. The bank number output is a sum of the base bank number set by the Z80, and a 2 bit number formed by ROM2 and EXT-ROM being bit 0 and bit 1 respectively.

With this logic in place and a suitable menu program written and debugged using MESS, I finally had the multicart working that I'd originally imagined.

A fairly simple job of re-working the original schematic and board in EAGLE, another simple job of uploading the design to my favourite short-run fab-house and a final simple job of waiting for 2 weeks and here is the result: 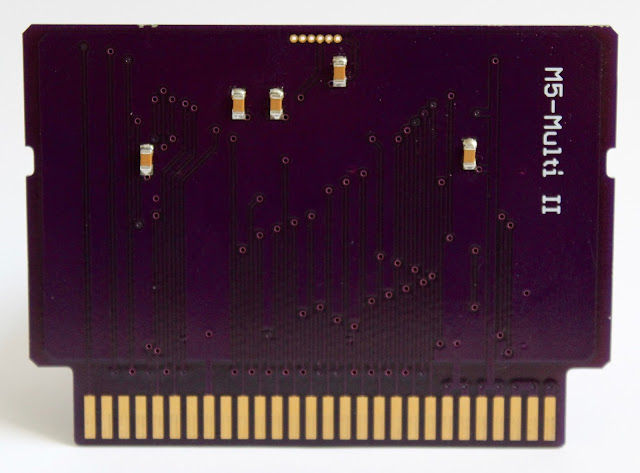 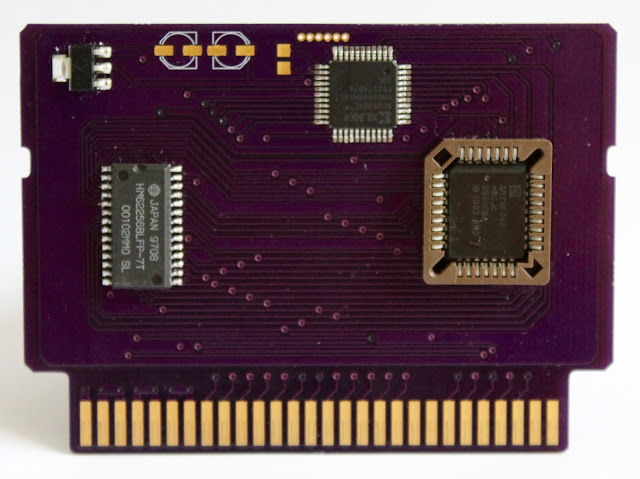 I just need to sort out a manufacturer for a mid size run of boards then I'll be selling these.
Posted by SirMorris at 10:12