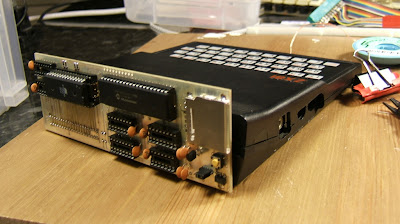 It's only taken me about 3 years.
This is the test fitting of ZXpander prototype 1. You can clearly see that there are some sockets empty. Well, I didn't want to overwhelm the poor old chap.
And yes, it worked! Eventually. After being hacked around so badly that the poor thing's mother didn't even recognise it. It ended up carrying another chip and looking somewhat like Joseph Merrick. But let's not get ahead of ourselves! This was P1, after all. Things are supposed to change. So to P2! Fast forward to only 9 months ago!
My good friend and inspiration Ramoth had been extolling the virtue of programmable logic. He has made the transition to the state of the art while I, comme d'habitude, crept in at the lower, and rather more obsolete level. I decided that I could just about cope with GALs and maybe, just maybe these would provide the answer to my overcrowded board problem! For that is what I had. I couldn't lay out the board to any degree of satisfaction now that 7 TTL chips were required.
So one eBay purchase of the most basic programmer capable of writing GAL fuse maps later, I was dipping my toe into the confusing and contrary world of programmable logic.
The best thing about setting out to work with obsolete technology is the complete lack of any decent documentation and sample code. Oh hang on, that's not the best thing is it. That's the _worst_ thing. Ho hum. Still, after having crawled inch by bloody inch up the steepest learning curve I've ever encountered since girls, I managed to make P2 work.
Here's its good side... 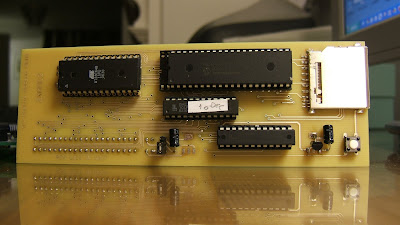 5 TTL chips lighter, this one only required some very delicate hacking... 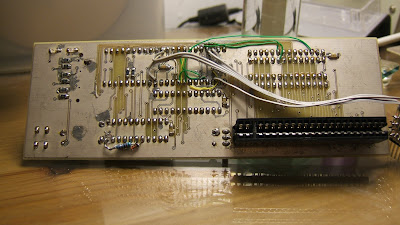 JESUS! What have you done to it man!
Well it needed some ICSPing. And an extra AND gate. And the 'get it quick' prototype board from PCBTrain doesn't get solder mask, so ... it's not pretty. I realise this. But you know what?
It works.
P3 is immanent. Watch this space!
Posted by SirMorris at 14:37

Hey Sir Morris, congratulations, this is a awesome job. Do you plan to open the project for DIY? Regards.

There are no plans at the moment but once all the boards are built I'll have some time to think about things like this :)

There will be further development on the board - for example I'm planning an AY-3910 add-on, and the joystick port pinout is now documented in the manual.