Not a voluptuous expression of joy for a broadcaster, but one of these...


... being an MMBeeb board. I have mentioned them before, but I've improved the design somewhat since then. This is from the last batch. SMT components and a rather cheeky regulator placement make these the tiniest and most comely batch yet. I like to make each one different, unique. Electrically they're identical but each has its own character. I like to talk to them when I'm alone. 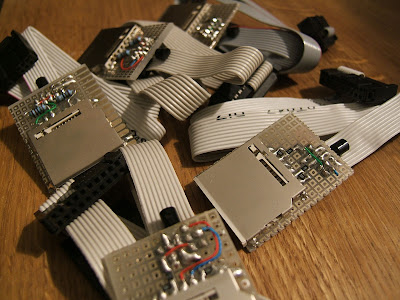 An MMBeeb board plugs into the user port of a BBC Micro and coupled with some smart coding by the original creator Martin Mather gives the contemporary BBC Micro user the ability to have at their disposal literally thousands of disk images all instantly selectable and appearing as though a genuine 5.25" disk.

They're fast too, programs load in seconds. G'orn there Chuckie Egg!
Posted by SirMorris at 13:10