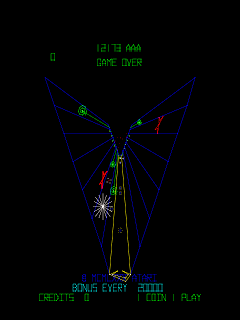 I've been inspired by someone or other's homebuilt spinner. I probably saw it on Make or Hack-a-day, I forget. If you aren't familiar with the aforementioned input device it's like, well you know, like an arcade game control that could be found on such classics as Tempest, Arkanoid, Cameltry and many many more. You spin it. Hence the name.

I had to have a go. I have a project stack 100 deep at the moment and no time to do anything, so I needed a quick fix, a micro-project if you will. And this seemed like the perfect candidate.

So the obligatory VCR head was pulled from a dead Matsui. This particular model had a wonderful head motor mechanism that came apart very easily and cleanly, leaving no random sprue like some I've been near. It also furnished me with convenient screw holes. The motor shaft has a metal disk at the end which was just the right size for some idle tweaking. There's something very relaxing and .. zen I suppose .. about VCR head motor mechanisms. I suggest everyone try hefting one and idly spinning away a few minutes :)

An old USB mouse was inspected and found to be of the correct vintage - ball era. The optical encoder disks were removed and the pcb ritually prepared. The left/right encoder was severed and the traces replaced with kynar wire. Did I already say that this stuff has changed my life? I did have to modify my wire strippers to nip away that micro-fine insulation and I must admit the very act made me feel quite hardcore!

So with the emitter/receiver pair free to do their thing I started to try and mount the encoder disk on the base of the motor. What a nightmare. I tried different adhesives and when the little black brolly wasn't teetering drunkenly on the shaft or resolutely embracing my fingers it was wholly and utterly eccentric. In the end I liberated one of the tiny rare earth magnets from a sneakily swiped Magnetix stick. To this I super-glued the encoder on its truncated shaft. This could then be pinged onto the end of the shaft and repositioned easily whilst still holding position. When it was rotating as centrally as I thought it could, out came the hot glue. One quick spin draged a glistening thread of glue from the gun like silk from a spider's arse. And there was the disk in place, semi-permanently fixed. Result!

To mount the spinner I chose a CD 'cake box'. I'll leave the details of mounting the motor to your imagination as I am wont to do. All I will say is knife and screws were involved, but not my friend the rocket scientist.

So with the motor mounted all that needed to be achieved was the solid mounting of the transceiver pair. Tip #2: Don't use stiff wire. I thought that this would be simple, quick and give me plenty lattitide to position the payload precisely in space with little play. Wrong. It bounced around like Katie Price on a trampoline. So I did what I always do at moments like this - reach for the Lego. A small 1x2 hinge, a 1x8 plate and some more hot glue later I had the PCB shard mounted in the right position. More hot glue saw it fixed and locked. Game on! 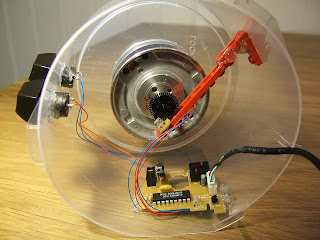 Cuts on your fingertips are painful. Rough-edged spinning steel disks attached to a momentum powerhouse cause cuts. Thinks needed :) The rubber 'tyre' that encased the middle mouse wheel was promptly repurposed. An almost perfect fit! I was understandably quite chuffed. While in the heightened state of chuff I figured some buttons might be useful too, in order to save splitting control between the keyboard and spinner when necessary. So off to the bits box and one feisty rummage later we have control! And the old BBC Master computer has 2 less keys.

One leisurely wiring of these buttons to the mouse PCB switch pads and there we have it. One spinner. It may not be pretty, but it was a project! And it works great with Tempest :D 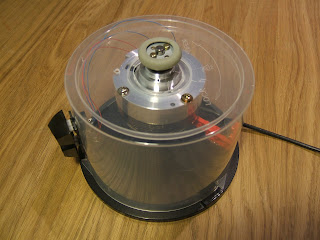