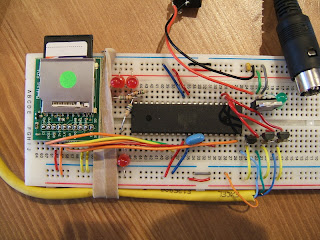 I've just hacked together an MMC2IEC interface on my breadboard. Thanks Lars!


It's a serial device that pretends to be a commodore 1541 disk drive. It uses SD card storage and disk images to deliver retrogaming goodness to my '128. This is #4 of 4 in my old computers that I've added flash storage to series. Seriously - if you have old computers and a few spare hours it's worth the solder burns.

Having got that device working in its original Lars form I noticed that the open source design has been picked up by a couple of other bods who have taken it to another level. Details are scant, unless you speak German, but I've managed to scrape enough information together to upgrade Lars' original hardware design with some improved firmware called SD2IEC. This supports many more features such as high capacity cards, disk switching, some fastloaders and JiffyDos which should speed things up considerably. Which if you've ever used a C64 disk system you'll know is a must. Some details in English are here.

During the process of upgrading I managed to half-brick an AVR chip. Unlike PICs they are easy to render unprogrammable by changing their configuration fuses in an an unfavourable way. My mistake was not reading the output of this avr fuse calculator carefully enough. Instead of making the AVR desire an external resonator, I made it lust for Clock. Which is different. I've done this a couple of times before with some 168s. In the aftermath of that embarrassing mistake I did some research and found that usually these chips can be resurrected.

If you program a chip to expect a clock, then it should be possible to reprogram it as long as the relevant signal is present. I usually program chips in a little home-made ISP cradle which doesn't have a clock available. For the 168s it proved possible to get them going again by dropping them in my Deicimilia board before attempting to reset the fuses.

The mega32 hasn't responded to this trick though. I used an Arduino to provide what I thought was a good clock to no avail. It's going to need something a little more ... high voltage. AVRs can be programmed using SPI in-circuit, or by more conventional parallel means out-of-circuit. Programming serially you need a well configured support circuit for the chip. Using a parallel programmer you can reset fuses that would prevent SPI from working. So here's my next project - an avr fuse reset device. A cut-down high voltage parallel programmer that only has one job - to reset the fuses to a factory fresh state. Insert AVR, press button, bingo! At least in theory :)

I'm off to grab some of Atmel's brilliant application notes. Then it'll be time for a nice sit down and some strawberry cheesecake.
Posted by SirMorris at 05:43

There are two reasons why some of the information about sd2iec is in German:

a) There doesn't seem to be that much interest about it outside of Forum64.de.

b) Web boards suck. I tend to focus on forum64.de because following the discussions in just one of them is annoying enough.

[c) There is one "blog"-style text about a sd2iec bug out there that I wrote in German, but that's because I was quoting from a few German books in there.]